The Angela Boyle ’53 Award for Service is presented to an alumna who demonstrates service to the community and fully represents the Ursuline spirit. Given annually during the spring Alumnae Weekend luncheon, this award is one of the event’s highlights that is shared with the classmates of the recipient and family and friends alike.  Angela Boyle’s history with Ursuline dates back to her graduation in 1953. Post-graduation, Angela was a beloved English teacher at Ursuline for many years before becoming the Assistant Principal. Her devotion to the school continued as she was named the first lay President of Ursuline Academy. After years of continued dedication and service for Ursuline, this award was named as her legacy. Angela remains active in the Ursuline sisterhood from her home in Florida despite the distance. 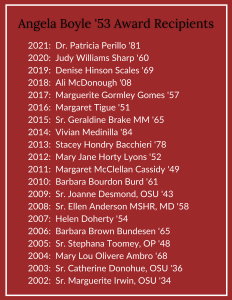 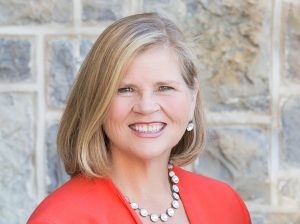 Dr. Patricia (Patty) A. Perillo hails from Wilmington, DE. As one of eight children, she was the first in her family to graduate from college and learned, early on in her college career, that education has the power to transform individual lives and that of communities. She knew that she wanted to work in higher education as a vehicle to make the world – one person and community at a time –more humane and just.

Patty has worked at seven institutions of higher learning before returning to her doctoral alma mater to serve as the Vice President for Student Affairs (VPSA) at the University of Maryland (UMD). Immediately before she arrived at the UMD, she served as the VPSA and assistant professor of higher education at Virginia Tech for seven years. She also worked at Davidson College, the State University of New York (Plattsburgh and Albany campuses), UMBC and previously at UMD, and the University of Delaware. She has worked in every functional area of student affairs, always focused on building collaborative, learning partnerships with student affairs and academic affairs and creating the conditions for students to thrive.

In addition, Patty has dedicated her time to God and Gangs, an organization devoted to youth violence and gang prevention, Relay for Life and the American Cancer Society, she has helped establish campus food pantries and worked with homeless students to ensure that everyone has a healthy meal and the resources to survive and thrive.

In her free time, Patty enjoys spending time with her wonderful spouse and extended family and close community of friends and engaging in the arts, athletic events, outdoor activities, exercise, prayer, reflection, music, reading, and entertaining.