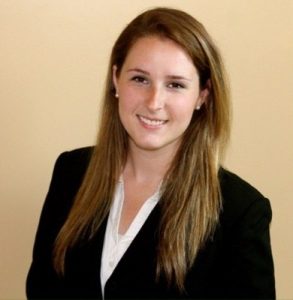 A 2008 graduate of Ursuline Academy, Dr. Ali McDonough is thrilled to be considered to play a role in the great things happening on Pennsylvania Avenue by potentially joining the Ursuline Board of Trustees. While a junior at Ursuline Academy, Ali experienced firsthand what the Ursuline sisterhood entails when her brother Andrew, then a freshman at Salesianum School, was diagnosed with Leukemia. The Ursuline faculty, students, and families rallied around Ali and the McDonoughs and grieved with her after Andrew passed away 166 days after his diagnosis.

Following high school, armed with the strong foundation of an Ursuline Academy education, Ali chose to continue living Ursuline’s Serviam motto of serving others. She earned her Bachelor’s degree in Human Services at the University of Delaware, and her Master’s degree and Doctorate in Clinical Psychology from Widener University’s Institute for Graduate Clinical Psychology, certifying in Biofeedback and School Psychology.

Since her brother’s passing in 2007, Ali has helped her parents to grow The Andrew McDonough B+ (Be Positive) Foundation into the nation’s largest provider of financial assistance to families of children with cancer. Additionally, The Andrew McDonough B+ Foundation funds critical, cutting-edge childhood cancer research that is already saving children’s lives and providing hope to families of children with cancer.

In 2018, Ali became the youngest recipient of Ursuline Academy’s prestigious Angela Boyle ’53 Award for Service. Prior to that, she was one of four national finalists for the NASCAR Humanitarian of the Year Award (2012), was awarded the Governor’s Award for Volunteerism (2012), and was recognized by the Philadelphia Eagles for their Community Service Award (2009). Ali is currently a Psychologist at Alexis I. duPont High School.