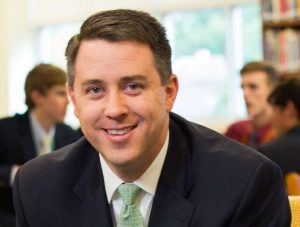 Brendan Kennealey is the founder and owner of Nester, a web app that launched in 2021, serving in the residential real estate industry. Most recently, Brendan served as Salesianum’s fourth president from 2011-2021.

In addition to serving on Ursuline Academy’s Board of Trustees, Brendan currently serves on the board of Red Cloud Indian School in Pine Ridge, SD. For several years, he taught Homer’s Odyssey and other great works at Ganger Hill, a maximum security state prison. He received a BA in Psychology from Boston College and an MBA from Harvard Business School.

Brendan and his wife Nicole reside in Wilmington and have two daughters at Ursuline.